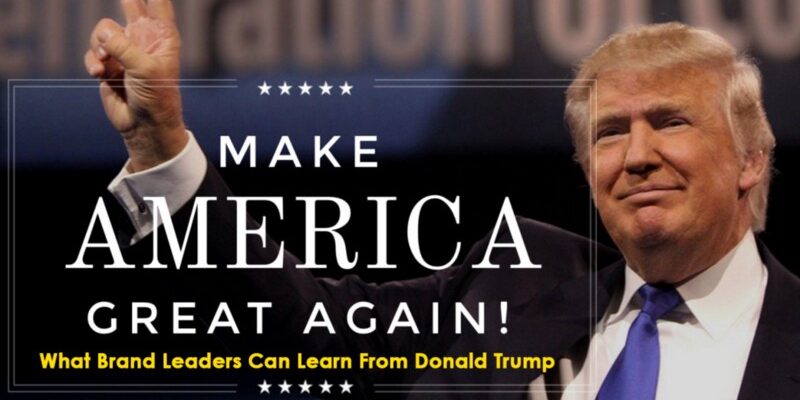 What Brand Leaders Can Learn From Donald Trump

What Brand Leaders Can Learn From Donald Trump

It’s November 9th, 2016, less than 24 hours since Republican Presidential nominee Donald J. Trump earned the vote of the American people to become the 45th President of the United States. This event has caused a definitive divide among Americans. Undoubtedly there are individuals who are happier than others about the results of the 2016 Election, but ironically we’re all in the same boat. Over the next few months we’ll all be sitting at the edge of our seats in anticipation of discovering what a Trump administration truly looks like.

On June 16th, 2015, Mr. Trump announced he was running for President of the United States. He was totally confident in his ability to conquer those who stood in his way of the Presidency. Why was he so confident? He did his research.

From the very beginning of his campaign he knew exactly who his target demographic was & how to communicate with them. He provided clarity about what he was all about, and did not waiver from this message. He established brand clarity early on, which allowed voters to easily digest his views and decide to get behind what he stood for.

Brand leaders of startups, small businesses, & large organizations must all realize that — “Clarity & Consistency are key in a brands success.”

Throughout our Brand Focus coaching program at Cultural Sync, we frequently remind clients that the purpose of the program is to clearly define three things — “who they are”, “what they do” & “who they do it for”. Once these areas are identified, it largely increases a brands ability to succeed.

Donald Trump informed the American people of the following:

“What he does” — Wants to make America great again, by providing a fresh perspective on how to fix our country’s troubled areas.

“Who he does it for” — Those Americans fed up with traditional politics, those hurt by the economy, & those afraid of Domestic terroristic attacks.

Yes, there were times during his campaign that made us question his judgment, but one thing remained consistent, his message. We heard a variation of the following statement from the start of the Presidential race to the end.

“You know who I am already, but in case you don’t, I’m Donald Trump. Billionaire businessman & the only person who knows how to fix the broken political system, create jobs, eliminate the National debt and defeat ISIS in a matter of no time. Trust me, I can do it! Let’s Make America Great Again!”

We relentlessly heard this message, and through his consistency Trump was able to build a tribe of diehard supporters that eventually elected him to lead our country.

Will Donald Trump deliver on his brand promises? This is something that remains to be seen, and can only be determind over the next four years. But we can all agree that we’ve seen first hand the power of brand clarity & consistency, and how it can make a seemingly impossible situation, a winning one.

Contact us today about our Brand Coaching Sessions, Brand Focus Workshops, & Brand System Development services. Please reach out to us via email, info at culturalsync.com or call us at (404) 969–6301.